It’s probably not surprising to hear that fruits and vegetables are good for you.

It might be a little more surprising to hear that a diet high in red meat and processed meats (like bacon, sausage, and ham) can lead to an increased risk for chronic diseases and premature death.

This could cause you to wonder: do vegetarians and vegans who avoid eating meat live longer?

Generally, vegetarians and vegans have a lower risk for chronic illnesses like heart disease, obesity, type 2 diabetes, and some types of cancer.

This is likely related to several factors, such as:

Since vegetarian and vegan diets are associated with a lower risk for chronic disease – illnesses among the leading causes of death in the United States – it stands to reason that vegetarians and vegans might live longer.

Is Veganism Better Than Vegetarianism?

Both vegetarian and vegan diets are associated with a lower risk for chronic disease and premature death.

However, with its further avoidance of eggs and dairy products, veganism might have an even greater protective effect.

Vegans may need to be more mindful of getting certain vitamins and minerals, particularly B12, but supplements and fortified foods can easily help.

An Even Better Approach to Healthy Eating?

It should be noted that vegan and vegetarian diets do not guarantee a longer life free of illness. People can still eat unhealthily while following these diets, and other people can eat healthfully while still consuming meat.

Veganism and vegetarianism advocate for the complete exclusion of animal products from the diet, but many food choices that are not meat yet still not healthful, such as:

This is why most health research recommends following a “whole-food plant-based diet” rather than veganism or vegetarianism specifically.

While veganism says, “Don’t eat animals,” a plant-based diet suggests, “Eat mostly produce.” A vegan could consume candy, french fries, and soda because they are not meat. A plant-based eater would likely avoid those because they are made mostly of refined carbs, unhealthy fats, and added sugars – not plants.

This whole-food plant-based approach can provide all the same health benefits that are seen with many vegetarians and vegans, but possibly to even more significant effect due to the absence of the unhealthy processed foods that vegans may indulge in.

The plant-based approach also allows for a rare occasion of eating meat or other treats, as long as the rest of the diet is primarily plant-based.

Whether you call yourself a vegan, a vegetarian, or whatever else, maximizing your intake of nutrient-dense plant foods while minimizing processed foods, oils, and animal foods are likely to lead to improved health and longer life. 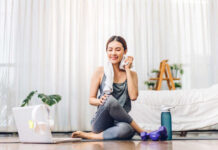